Most chess takes place in Scotland between August and April - the summer period is generally quieter and only the Scottish Championships and one or two congresses occur then. The League season is October to March and our own tournaments mostly mirror that apart from the championships which stretches a little further past the end of the season. 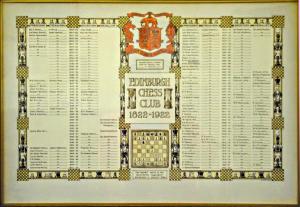 We run the Club Championship on an all-play-all basis for the stronger players with a Swiss for the lowest level event.

Entry for this year's championship is now closed. The formats and dates are as follows:

An 8-player event run over 7 rounds. Composed of the champion, the top 6 rated players entering, and the winner of the next level tournament from the previous year.

Similar to the top event and composed of the next 8 rated players entering.

The remaining players will play a 7 round Swiss tournament. To avoid having very strong players playing the less experienced in the first few rounds, the pairings will use an accelerated system. Pairings for the Challengers will be made available on the Saturday before each round.