Development of the Club - The 19th and early 20th Century 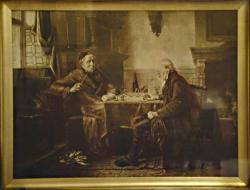 After such an auspicious start life was quiet for the next few years. In 1836 George Walker dedicated his Selection of Games played by Philidor to the gentlemen of the club, and the records show that the club had premises in St Andrews Sq in 1838 with a rent of £22, but things were not always easy for the club. The lack of a permanent home doubtless caused problems and at times the members met in each other's houses. The office-bearers continued in office and the club's property was retained but there were periods of inactivity.

Another club called the Edinburgh New Town Chess Club was formed and had good relations with the senior club - James Donaldson who had been the pride of the Edinburgh side against London was elected a member and gave them his blessing. They played in the premises of the Philosophical Society in Queen Street, still playing by candle-light, and later combined with them.

However the rules of the Society were apparently restrictive and it was decided to combine the old club with the new and relaunch the club, which it did successfully with the help of Howard Staunton - by then the strongest player of the time. On 5th July 1852 it relaunched at 73 Princes Street and Staunton was guest of honour at their first meeting and dinner. He played a match against three of the club's members at odds of pawn and two moves before the membership moved to supper at Douglas' Hotel. James Rose who had been Secretary since 1825 and was the only remaining member of the original club, was elected President and Staunton was elected an honourary member. He remained a firm friend to the club for many years.

Having been thus revitalised the club seems to have prospered. The records include a letter dated 1865 from a printing company in Rose St replying to a request to increase the printing of the club's laws from 70 copies to 100. In the same year of 1865 Edinburgh and Glasgow played a match over 12 boards with 6 players travelling either way - a novel way of solving the problems of home advantage! Edinburgh won the match with a team that included a 23 year old advocate called Walter Spens. He was to be a great proponent of the game and is remembered in the Spens Cup which he donated to Scottish Chess. A year later a similar match was again won by Edinburgh 15-13 but 25 years later the balance had swung rather heavily as Glasgow won a 1891 match by 17-2 . 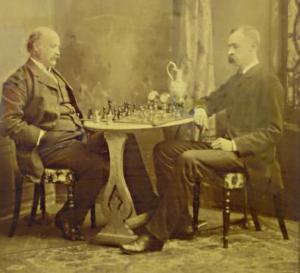 The club was now an important part of Edinburgh society and from 1884-86 had as its President the Lord Provost of Edinburgh Sir George Harrison.

In the late 1880s Edinburgh played three matches against Newcastle. The 1st first match took place in Edinburgh in Jan 1887 with Newcastle winning 17½ - 10½. The second match in Newcastle in April 1888 was much closer with the Englishmen edging it by 10½ - 9½ and a third was played in Edinburgh in Nov 1889.

The club moved towards the 20th century in good heart and when the new Scottish Club Championship for the Richardson Cup was started in 1899 they were amongst the main contenders. Dundee won the first competition, but after that it was Edinburgh and Glasgow Chess Clubs who shared the triumphs for the next few years. Only Central Chess club disturbed the domination of these two over the next 38 years. In total Edinburgh has won the tournament on 23 occasions while the now disbanded Glasgow were successful 34 times.

1909 Hastings chess club undertook a tour in Scotland and played a match against Edinburgh.

The club occasionally returned to the correspondence game where they had made their initial reputation, taking on Turin in 1911, Newcastle in 1916, and Paris in 1923. You can see these games in the same page as the London match.