I’ve been making some changes to the technical capabilities of the menu system of the club’s main website to allow us to include more history, biographies, and articles. The first visible change is the addition of an Articles section under the History menu which has as its first entry an article I’ve been working on about the remarkable flowering of talent which occurred in junior chess in Edinburgh during the 1960s and 70s. This is entitled A Golden Age for Edinburgh Juniors – the 1960s and 70s.

I hope you enjoy it and if anyone has anything further that they can contribute to it then I’d be delighted to hear from you.

Equally if anyone would like to write anything about the club’s history or personalities then do contact me – bill@billmarshall.co.uk

The son of Angus Burnet, Jon Burnet, has kindly donated some of his late father’s books to the club. In his donation letter Jon mentions that Angus features in “500 Master Games of Chess” by Dr S Tartakower & J Du Mont (which is also held in the club’s library)!

Some of the inscriptions pasted in the donated books include a press clipping showing him winning the first Koltanowski Chess Cup in 1931:

Angus moved to Edinburgh in 1930 and was Scottish Boys’ champion in 1931, 1933 (shared with A.A. Thomson), and 1934 (after winning the deciding game with A.A. Thomson).  He played in the World Record Blindfold Display by Koltanowski at Edinburgh 1937 and was successful in club and league chess in Edinburgh, distinguished himself in several Scottish Championships and played in the 1951 Scotland-England match.

The SCA history web site has a number of pages with further details about Angus’ chess career and his involvement in Koltanowski’s blindfold display which, incidentaly,  also has the score of his game versus Koltanowski.

A letter of appreciation has been sent to Jon for his kind donation.

In preparation for the club’s 200th anniversary in 2002 the sub-committee, chaired by Raj Bhopal, carried out a deep dive last night into the club’s archive and records.

The session was led by curators Ian Whittaker and David Archibald.  They first gave an outline of the types of material held by the club:

Examples were shown of the approach being taken cataloguing the library, magazines, digital media etc.

The group then made a deep dive into the cupboards!

The next club event, on Tuesday 18 February, will help prepare for our bi-centenary.  We will be going over the history of the club with a view to improving our understanding, especially in the later years.

David Archibald will introduce the proceedings for about half an hour. After that, we will invite listeners to share their knowledge and stories.  We will then discuss how we bring our historical document up-to-date.  Ian Whittaker will produce audio recording of the evening so we don’t miss anything.

If you are free, please come along to share and learn about the club’s rich history. Arrive at 7.30 for a 7.45 start as usual.

The bicentenary subcommittee of the council will be meeting in the club premises at 7:30 PM on Monday, 10 February.

The main topic of discussion is the club archives. If you have an interest in this or you feel you have something to contribute please come along as a guest of the subcommittee. 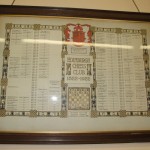